Working with teaching staff and faculty we often think about digital skills in education. But digitalization is not limited to learning and teaching, but to life in general. We all constantly live in a hybrid space where material world is enhanced or even complemented by virtual space. It often is described as augmented reality (or virtual reality, if the material space is explicitly excluded). Surprisingly a considerable number of our teachers still refuse to deal with this digital reality. They are still convinced that the material world is the real world, and the virtual world is unreal. Even though relationships between students and teaching staff find their manifestation in the virtual space, tasks or problem solving are represented or even done online, the virtual element of our environment is often still denied.

When it comes to elearning or blended learning there is scepticism towards new skills and competence to be acquired individually because of the required effort. But anything new to be learned requires effort and time, as our brain has to find a way to incorporate new knowledge and new skills to new competence which often requires some personal experience. Some of my colleagues seem not to be concerned enough that they could be left behind one day soon, and they decide not to deal with digital learning at all. It seems somewhat surprising that some colleagues still think those techniques and skills are required in the future, but not now. The resistance is considerable, as well as the gaps opening up between the different (and heterogeneous) groups of users. Even more surprising is the fact that people seem to reside in different times, different eras: some are still residents of the industrial age even though some are still young, some have arrived or are born in the digital age, shifting even at quite an old age already.

During my research of digital literacy I found several articles or concepts as well as different approaches. First there is already the term that is used for the range of competences and skills summarized by digital literacy. In the German speaking part of Europe media literacy is often considered as a former term for digital literacy – and therefore used as a synonym.
One approach developed by the Austrian Professor of Digital Teaching at Krems, Peter Baumgartner, develops a very broad picture with nine dimensions of digital literacy for teaching. The competences described refer basically to the field of teaching and learning in education, and not to a larger scale of scientific or other professional work or even life in general. As mentioned above the term media literacy used in Baumgartner’s paper is a derivate of the old equation media = bearer of any kind of (digital) content.

all of those fields located in education have to be acquired by both, teachers and students. Thus, teachers and faculty has to be competent and performing in all those fields. It implements all the abilities of the 21st Century skill palette from Critical Thinking (education, ethics, critic, theory), Communication, Creativity (didactics, design, educational media production) and Collaboration (use of digital media). There is the critical approach, the productive aspect, the learning outcomes, as well as knowledge in jurisdiction and ethics.

The broad field of media literacy in general mirrors the extent that our society is concerned by digitalization.

Digital literacy as a general skill

A similar picture of seven elements is pointed out by Jisc organization. Their concept uses newer terminology in my opinion, but the competence fields for a successful development of digital literacy are similar: 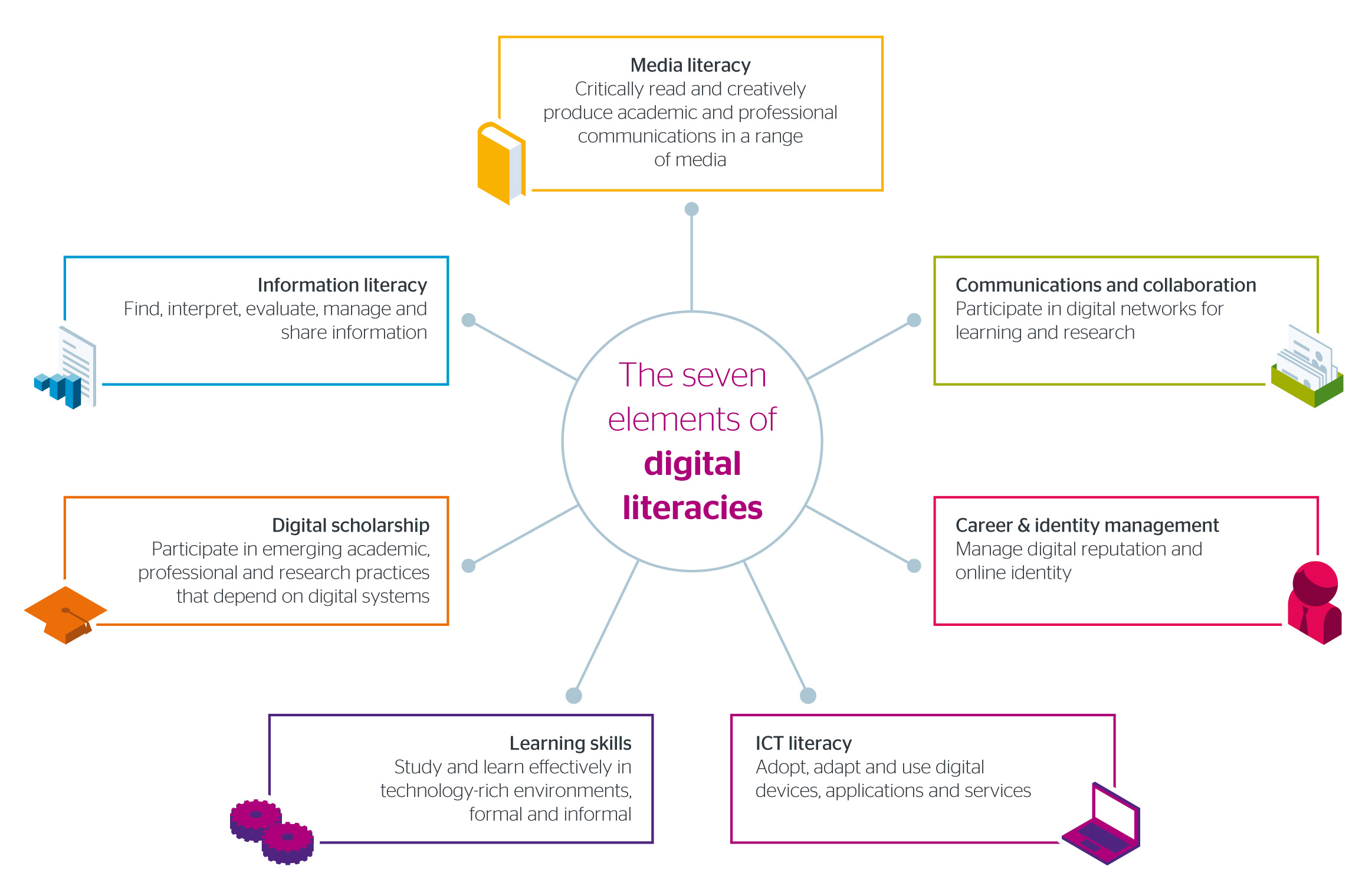 In this concept the term “media literacy” is not used as a synonym for all the “digital literacy” as in Baumgartners conception, but only for one field of use and production of digital media. All the other competences are somehow digitalized general soft skills that are not bound to certain scientific or professional knowledge but describing a personal approach to it that some of us might need. The Jisc layout of digital literacy shows a much broader view and applies to professional life as well as life in general. ICT literacy for instance touches every field of daily life from talking to your relatives, going shopping, voting, paying bills to getting a book in the library. Information literacy is a crucial skill of today’s professional and personal life and not limited to education itself.

To me the fact that digital literacy touch everyone today, young and old people here and there and not only the future generations points out the importance of competence development in the area of digital media and applications today. The digital age has arrived. The future is now.